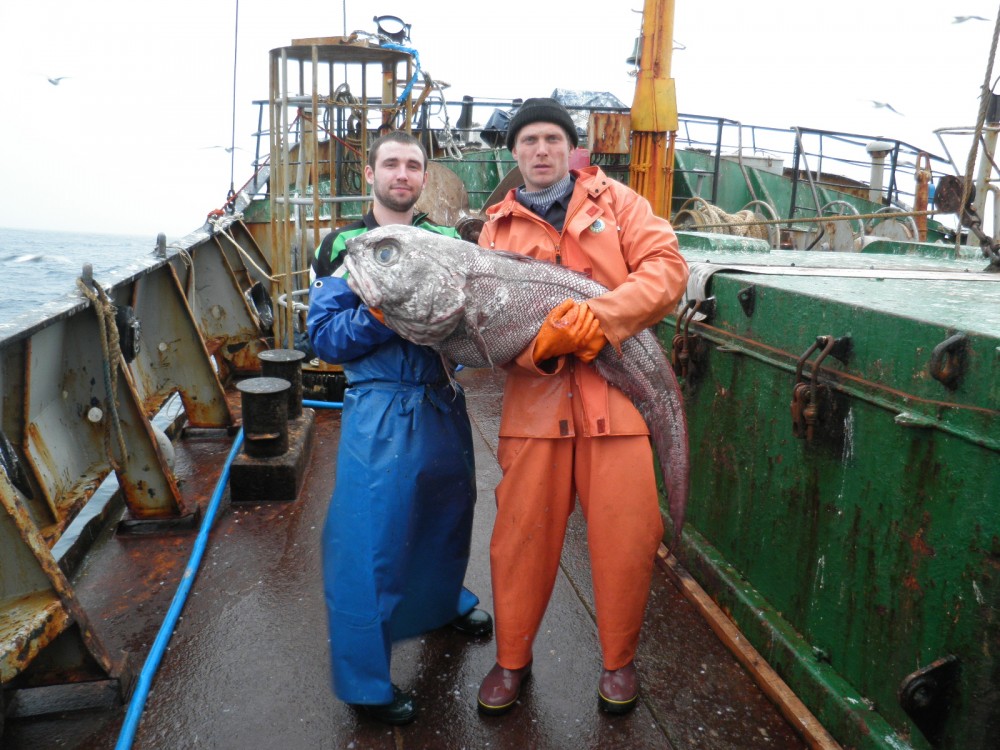 A success of deepwater fishing

Far East fishermen believe that a success in deepwater fishing requires interaction between science and authorities.

Fishing in depth is always a challenge. That is why deepwater harvesting in the Far East is developed slowly and selectively, according to Zolotoy Rog business newspaper. In the middle of the 1990s Vostok-1 Collective Fishing Farm was one of the first fishing companies that dared to longline for black halibut, which was considered to be a deepwater fish that time, in the Sea of Okhotsk. Fishermen society was then very sceptic about the efforts. Today Vostok-1 can declare that primary resources at the depth of 2.5 meters have vast potential, and they are available for commercial harvesting. However, prospects of deepwater fishing depend not on fishermen only.

The fishing collective farm people say that 10 years ago longline fishing at the depth of 600-800 meters was considered to be a record. Black halibut yields reached 12-16 tons per day, which is a very high performance. However, the company moved beyond, and soon company’s longlines started going 1.5 km deep. As a result the well-established halibut fishing was supplemented with grenadier yields. Concurrently, the company assimilated Japonicus and Angulatus deepwater snow crab fishing at the depth of 800-1,200 meters.

Nowadays the situation has changed, and fishing companies once leading halibut fishery had to go deeper. They are forced by a pressure from catfish increasing with each year. Catfish trace fishing vessels and bite off the yields. Fishermen are at loss for catfish is a Red Book species and they can’t be killed. Moreover, catfish seems to be the most clever mammal inhabiting the waters today. They learn fast and get used to anything. Along with direct damage to the fishermen society from biting off halibut yields, catfish also trains young catfish. The losses are considerable, profitability goes down because the yields drop. Vostok-1 finds a way out of the situation in the depth again. First they went down to the depth of 1,000-1,500 meters to harvest small-eyed grenadier, in 2014 they started to set longlines at the depth of 2.5 thsd meters where black grenadier accumulations were found available for commercial fishing. Catfish can’t take off black grenadier from the longlines, because the fish has a hard thorn on its back which makes it inaccessible for catfish. Thus, the company solved two problems at once: they found a new commercial species and proved that the depth below 2.500 meters are inhabited by enormous quantities of fish. Fishermen say, “a fish is on every hook”. Another important aspect is that catfish does not interfere black grenadier fishing.

For some years the company was honing its skills in the new type of fishing, elaborating the techniques and technology, arranging issue related to ship borne equipment and training its staff to fish in the depth. They had to learn from scratch.

The invested efforts and funds paid off, the company has assimilated and is now successfully engaged in grenadier fishing. The species has become the major one in the yields, thus, as of September 1, 2015 grenadier accounted for 10 thsd tons out of 15 thsd tons of the fishing farm total yield. This means that more than 2/3 of the yields come from the depth down to 2,500 meters. By the end of this year the company plans to catch 5 thsd tons more of grenadier.

Many years of stable operation of Vostok-1 vessels for grenadier fishing, with daily yields per a medium tonnage vessel reaching 40 tons prove that grenadier has a huge potential as a primary resource.

Experts say no other commercial species in the Far East basin harvested by longliners can compare with grenadier in abundancy. However, grenadier stocks will be estimated with “presumable” and “probable” reservations, until scientists come down to the sea to perform full fledge research.

Vostok-1 is sure that deepwater fishing can be a significant contribution to Russian raw materials base. The country will receive additional resources that will be able some time later to relief the pressure on cod and Alaska pollack, to open new jobs and develop new production facilities. It’s all about the research, which is required for estimation of permissible yields of the fish. Trawl survey is needed for this purpose, but equipment of the research vessels went obsolete long ago. Back in the 1990s scientists could submerge the trawls down to 2.500 meters, now they say the depth limits for the equipment is 1,00 meters. While the depth is inaccessible for the research fleet, comprehensive studies of the resource are impossible. The work is yet in progress, an estimation technique can be elaborated for longlining and approved by relevant authorities. In such a case we will let scientists work on board our fishing ships equipped with required deepwater fishing gear. The approximate data is very promising, in the 2000s alone grenadier biomass was estimated as 1.5 mln tons.

Low loyalty for the product is another problem with grenadier. Deepwater fish lacks a traditional consumer. “Today we are developing two large projects, - says General Director of Vostok-1 Alexander SAIFULIN. – The specific fish is not very popular on the sale market yet. So we focused on fishing and also intensified marketing for the product. Last year we made presentations of cooked grenadier. A Japanese cook handled the fish and offered consumers several fine cuisines. Assimilation of the species and achieving high prices will certainly take time. Meanwhile, advantages of the fish include an affordable price and an amazing nutritious value. Deepwater black grenadier is amine of indispensable amino acids, the content is almost twice higher than that in halibut. While in Russia the unfamiliar species is seldom noticed by consumers, in China its health properties and attractive price has been appreciated. This is where most of the yields go. Currently, export to China has been suspended because of changes in Chinese customs laws. They just forgot to enter grenadier into the list of fish species permitted for import. Vostok-1 has already applied to consulate of the country for amendments. We hope the amendments will be made by the end of the year, because until now Chinese customers have been taking much more grenadier than Russian ones. Although we can observe some positive trends, sales in Russia increased twofold, from 1,200 tons in 2012 to 2,400 tons in 2014.

The cautious attitude to the new fish species is related to the fact that a more popular small-eyed grenadier is somewhat watery. Black grenadier is much more thick. As to eating qualities, depending on the method of cooking it is similar to cod family species, where it actually belongs. Fish processing facilities should pay closer attention to the fish species, with regard to the price trends for cod and other white fish.

The experts make no secret that deepwater fishing is a costly affair. Working at such depths requires heavy-duty fishing gear. We have no Russian-made analogues for such gear yet. We have to use more durable 12 mm main lines instead of standard 11.5 mm ones. Heavy-duty logs are required to reach the depth down to 4,000 meters. There is no use in fishing with any other log at such depth, for when you don’t see the fish the fishing efforts are hopeless at such depth. High costs and low price for the product make fishing low margin.

What is most important, we have a stable raw material base. The depth is probably concealing more stocks of the species that we don’t know yet, the stocks of pure raw stuff. So, in spite of the economic hard ships deepwater fishing is being developed. Tenner snow crab inhabits the western part of the Bering Sea, at the depth of 2,000 meters. Nobody harvests for the crab. No quotas are assigned for it, again because a survey is required first. We do have king crab and other armored sea species, more accessible for commercial fishing. Due to poor fishing efforts in respect of deepwater crabs and fishes their stocks are rather large and stable. The resulting products are environmentally safe and healthy for a human, for deepwater fishes are rich in indispensable amino acids, microelements and nutrients, richer than other sea species. Virtually, there are some specific features of deepwater fishing. Large distance from the fishing grounds to the shore makes shore-based processing impossible, and fresh frozen products have to be manufactured on board fishing vessels.

Deepwater inhabitants are still understudied, and real abundancy of their stock has not been investigated completely. However, according to actual fishing data, deepwater resources are enormous. Therefore, development of the fishing will allow for a considerable increase in both total aquatic bioresource stocks and fish product volumes without an increase in the yields of traditional bioresources, which have been exploited enough already. The work performed by deepwater fishermen today can result in increase in raw material supply for the industry, gross output of the products, development of additional production facilities and creation of jobs, all safe for the environment. The experience proves that we must expand research in this field, otherwise we will lose the time until stocks of more popular fishing species reduce drastically. Although today deepwater fishery is not a panacea for the deficit of bioresources, it may soon become the very tool that will stop depletion of sea populations.

Vostok-1 is up and ready. What about the Government?

It’s safe to say, Vostok-1 has mastered deepwater fishery for fish and crab. Having spent considerable funds for purchasing deepwater species at the auctions, retrofitting vessels for the fishery, purchasing required equipment and training its crews since the beginning of the century, we are ready now to undertake additional burden and to provide the science with the possibility to work on board our vessels.

Now it’s up to the government. Research on grenadier and other species must be facilitated to ensure deepwater fishing development. Along with assistance in expanding the research, certain preferences should be thought out for those who will endeavor to undertake deepwater fishing.

“We know from our own experience how hard it can be, we had to take expensive loans to spend dozens of millions of dollars, and thanks to successful assimilation of the fisheries and, in particular, marketing of deepwater fish species, we got rid of the most part of our loan burden and current debts as late as this year. It’s not clear yet whether the government will grant any preferences to companies engaged in deepwater fishing or those who will dare to. No doubt, the preferences are needed, at least in the form of preferred interest rates, for a game changing comprehensive program of fishing development in the Far East seas is being implemented. It’s a well-known fact, exploration always needs huge initial investments”.