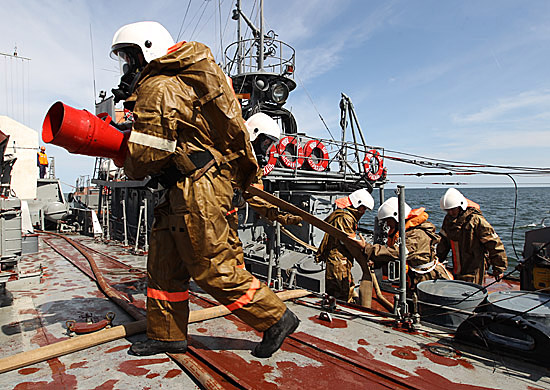 Seamen from longliner Vostok-4 belonging to Vostok-1 Fishing Collective Farm, Vladivostok, skillfully carried out an operation on rescue of a crew from a vessel in distress within very unfavorable weather conditions at the risk of their own vessel.

On December 21 freezer longlinerVostok-4 was fishing in the area of Diana strait near the Kuril Islands.

At 20:30 ship’s time they received an alarm notification via 16th channel of VHF about fire at medium fishing freezer trawler Atlant located in a distance of 15 miles from them in territorial waters of RF. It was said that the vessel was on fire, and since it was impossible to extinguish the fire it was necessary to quickly evacuate the crew.

He literally rushed to rescue and only after that reported the situation to the instances thus saving precious time, in spite of the fact that agreement nowadays is performed quite quickly every second was important. By such act Master Director V.P.Novikov demonstrated his concern about human fates and his sea character. Those dashing actions paid off.

All the required notices about entry into the territorial waters in order to help the crew in distress were sent when moving towards the burning medium fishing freezer trawler Atlant. The weather was not favorable for any rescue operations; usually in such situations vessels are put in a gale head into the wave maintaining a sufficient distance of several nautical miles from each other. Wind speed reached about 20 m/sec and wave height - 4.5 meters. Visibility was poor because of snow flurries.

In more than an hour Vostok-4 reached the accident site and heaved aback the bow of medium fishing freezer trawler Atlant. In the light of spot lamps they could see two rafts PSN-20 put afloat and tied to the board. Crew members from the burning trawler crowded near the storm ladder. They were getting ready for boarding in the rafts alee. The vessel was engulfed in flames, clouds of black smoke covered Atlant, and tongues of fire were bursting out of illuminators.

In the meanwhile crew of longlinerVostok-4 got ready for acceptance of the rafts from the lee starboard.

22:00 Boarding in rafts was begun on Atlant. The wind got up till 25 m/sec and huge waves were just boiling near the board. The burning vessel drifted down the current at a speed of 2 nodes. The trawler was washed away to the Pacific Ocean via the strait. They could not hesitate in such acute situation. Every minute counted…

22.30 Finally, boarding of the crew of Atlanta into the rafts was finished. Master of the vessel in distress notified about it via VHF. Casts were loosed. But there emerged another problem - the rafts just glued to the board of burning Atlant. It took ten minutes to Sakhalin fishermen to move the rafts. And only by pushing off the board using oars, the rafts tied together began to slowly move to the bow of the burning vessel.

22.40 Having overcome high waves and strong wind the rescue team separated the rafts from the ship side with a big difficulty. After that the life rafts with people were swept off from the trawlers in a distance of 20-30 meters. They began to drift in parallel with the burning vessel. People on the rafts had a rough time: the rafts were literally rolled and covered by icy waves, height of which reached up to 4.5 meters.

- By maneuvering in runs and courses we began berthing to the rafts, - says the Master. - In five minutes the rafts were moored from the starboard. With the help of storm ladders, life savers with lines and safety harnesses with lines we began to lift people from the first raft. In 15 minutes we took onboard 13 people.

Yet, a stormy sea did not want to release its prisoners. A heavy wave rushed with such a power that the second raft with 11 fishermen was rent off the board and the bundle with the first raft (rail fixture was pulled from the inside). The raft moved aft the longliner. Meanwhile, distance between the vessels was reducing slowly but catastrophically.

And again Vadim Novikov, Master of longlinerVostok-4, showed his no mean abilities.

- By maneuvering in runs and courses we moored the second raft aft, - tells the Master. - People on the raft at the head of the Master managed to pass and put our throwing lines under the raft, which gave us a chance to drag the raft to the ladder manually and continue taking people onboard.

Yet, meanwhile, a stormy sea moved the burning vessel too close to the longliner. Not every minute but every second counted.

- We moved a bit forward to avoid berthing of our aft with the after of the vessel in distress, - tells Master Vadim Novikov. - It was important to reliably fix the raft with people to the board. We had to take them onboard as soon as possible, since the vessels were in one line, one aft close to the other, on a distance of 20-25 meters. We had to control the situation every second…

Master’s concerns were understandable: every moment a disaster could happen. The situation was aggravated by boisterous weather: a stormy sea with waves of more than 4 meters high, strong current and hurricane wind. Fishermen from Vladivostok-4, in spite of a slippery icy deck, managed to drag the raft to the selective window and take two remaining people onboard via the window using safety harnesses with lines.

23.40 11 people were on the second raft. 24 people were taken onboard of the longliner in general, at the head of the Master of Atlant. During the rescue operation he broke two fingers of the left hand. A splint was applied. Other people were in satisfactory condition. They thawed out, took shower and had their clothes washed on Vostok-4. After that people from Sakhalin put on warm clothes and were provided with a night’s lodging to the extent possible.

Soon the longliner went away from the burning vessel in a safe distance. Everyone onboard saw that the fire on Atlant became stronger and flames were approaching to the pilot house. There was no doubt that any hesitation on the part of rescuers could have resulted in people’s death. However, the fishermen from Primorye came in time and rescued the crew of the vessel in distress.

However, during the rescue operation the 25th crew member was missing. A.V.Chernyagin, Master of medium fishing freezer trawler Atlant, answered to the relevant question that at first the Chief Production Foreman A.G.Rizhka was in a place where the crew gathered because of the fire alert, but then, according to some crew members, he went down to the living quarters for some reason and did not come back. The Master was sure about his death.

It should be noted that from the beginning to the end of the rescue operation Vostok-4 kept in touch with Vostok-1 management, its emergency operations center, by the phone. After all the survivors from crew members of “Atlanta” were taken onboard, it was decided to deliver them to port Severo-Kurilsk. It was the closest one to the place of trawler wreck.

Longliner Vostok-4 delivered saved Sakhalin fishermen from Atlant from the area of the Kuril Islands to port Severo-Kurilsk. They were put shore on December 23, where they got the required medical and other aid.

These are the comments of V.Kh.Shegnagaev, the Chairman of the Board of Directors, given in his letter in relation to actions of V.P.Novikov, Master of freezer longliner Vostok-4:

“…Taking into account a stormy weather, a wind of 25 m/sec and strong current in the strait and evaluating this situation as very dangerous for Vostok-4.

Actions of Master V.P.Novikov and his crew members, undoubtedly, belong to a category of heroic ones, and we shall apply to Primorskiy Region Administration for recommendation of Master Vadim Pavlovich Novikov for government award.

…Maneuvering in 20-30 meters from a burning vessel in such weather and saving rafts with people at the same time are very complicated maneuvers requiring not only extraordinary skills but also outstanding courage, since only several seconds and one wrong movement separated both vessels from a possible catastrophe.

Dear Vadim Petrovich and members of Vostok-4 crew, let me make a profound bow on behalf of me and staff of Vostok-1 and thank you for rescuing seamen of medium fishing freezer trawler Atlant